Manual scavenging – the hazardous removal of human waste from drains, latrines, septic tanks and sewers by hand or with basic tools – persists as a form of caste-based slavery in South Asia. Across India, Bangladesh, Pakistan and Nepal, men, women and children from low-caste, religious and ethnic minorities manually handle our waste, frequently resulting in injury, illness and even death. Since 2014, an estimated 156 people have died in septic tanks in Bangladesh alone, while in India one person dies every five days after entering septic tanks and sewers, often drowning after falling unconscious from toxic gases.

Over the last 5-10 years, there has been growing attention on the potential of robots, Artificial Intelligence (AI) and machines to eliminate manual scavenging for good. Recent media and academic articles reveal opportunities and challenges brought about by mechanisation. We take this further and offer some avenues for inclusive practice on a process (mechanisation) seen by many as the only viable way to eliminate manual scavenging in our towns and cities.

A range of global technological innovations in sanitation have emerged in recent years, from sewer-cleaning robots such as ‘sewer crocs’ or ‘bandicoots’ and AI or manhole monitoring systems (to identify and resolve sewer blockages) to mechanical trucks (to suck out human waste from septic tanks) or Gulpers (hand-powered pumps). The creators of these innovations, including private technology companies, claim that they improve efficiency, safety and dignity of sanitation work, by removing or reducing the need for human contact with faeces. To help us understand some of the opportunities and challenges brought about by mechanisation, we first need to place this process into the deeper historical, social, political and economic context in South Asia into which it’s deployed, and ask: who is engaged in manual scavenging today, and has this changed over time?

In India, manual scavenging is most commonly associated with Dalit women (of various sub-castes, most notably Valmiki) collecting and dumping waste from dry latrines, often found in rural areas. Widows from the ghettos of Mumbai have also been found to do this work, often recruited upon the death of their husbands through manual scavenging, or ‘sewer deaths’. With the introduction of the 1993 and 2013 Elimination of Manual Scavenging Acts, subsequent directives to demolish dry latrines and improve sanitary facilities in line with the Swachh Bharat Mission (SBM) and Atal Mission for Rejuvenation and Urban Transformation (AMRUT), the mode of manual scavenging and gendered nature of the work is changing. Far from being eliminated, manual scavenging has simply adapted with modernisation, with a shift from dry latrines (though these also remain in some areas) to the removal of human waste from pit latrines, septic tanks and sewers – a task most commonly undertaken by Dalit men. In Bangladesh, too, low-caste men (largely from self-defined Harijan communities, or ‘children of God’ as they were originally referred to by Mahatma Gandhi) are predominantly involved in the handling of human waste, using their bare hands or basic tools, such as a bucket, rope, and spade. It is within these underlying social contexts that new technology is being trialled and gradually introduced, but to what effect?

Across India and Bangladesh, governments (national and local), international donors, NGOs and private companies have been instrumental in rolling out technologies and associated programmes to improve sanitation work, and sanitation services. In India, sewer-cleaning robots and machines such as the Bandicoot are slowly making their way to different municipalities and local authorities, most recently in Tiruppur Corporation to great jubilation (Tamil Nadu having the highest recorded number of sewer deaths across the country). In Bangladesh, Gulpers and mechanical trucks (known as Vacutags) have been introduced in a range of municipalities and city corporations. In both countries, the introduction of technology –  often accompanied by provision of uniforms, personal protective equipment (PPE; e.g. gloves, hat, boots, masks), skill training and, in some cases, higher wages, has helped to professionalise the sector. It also greatly improves health and safety, with workers better protected against chemical, physical and biological hazards, and some reporting greater respect from service users, though this is not always the case. The introduction of technology and PPE to safeguard the wellbeing of sanitation workers has also been supported by efforts to introduce social security schemes, such as the ‘Garima’ scheme in Odisha, India, covering 20,000 sanitation workers and their families. 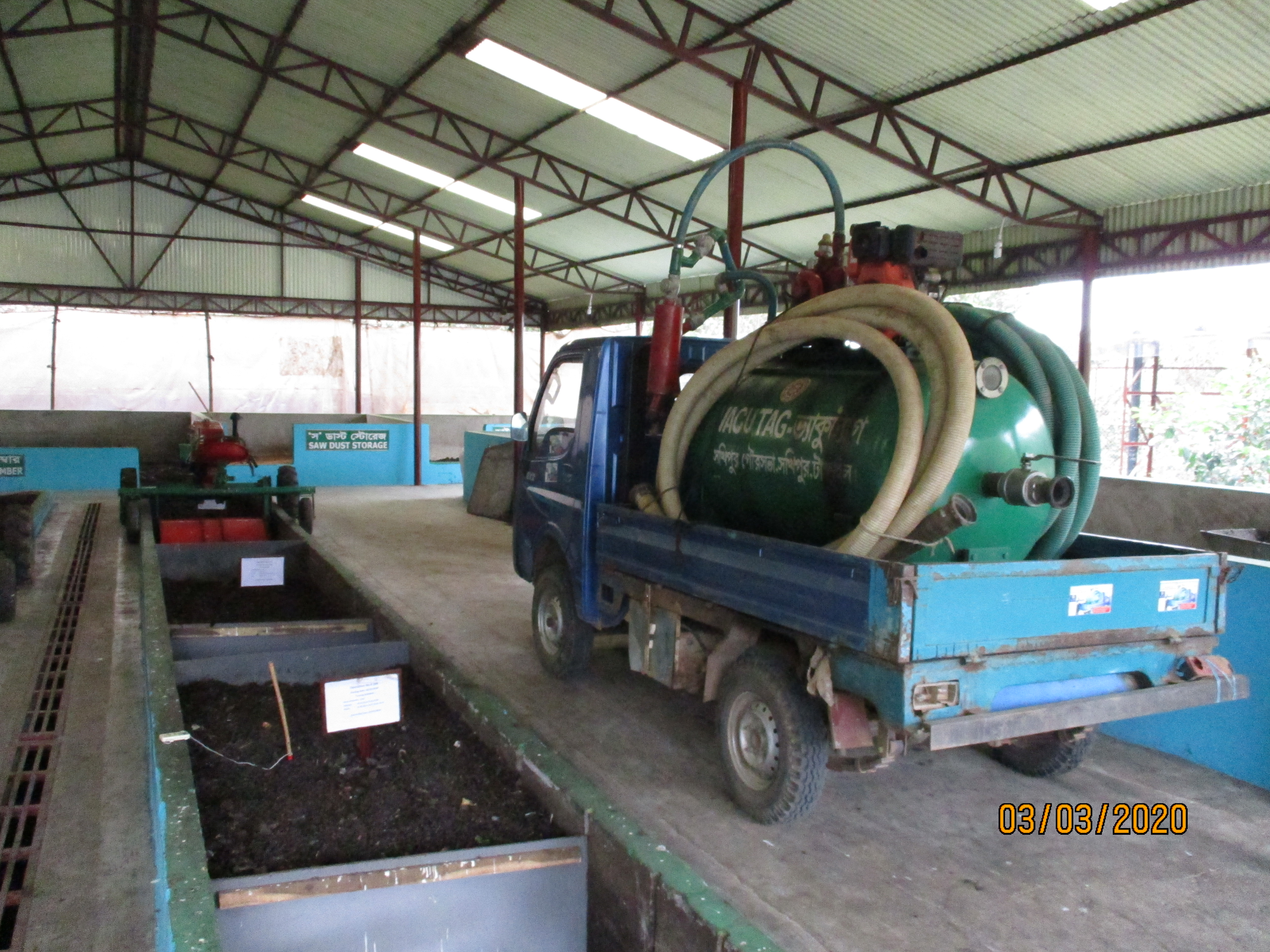 Whilst these interventions have brought about marked improvements, they have also brought tensions and contradictions. Two main points are noted here. First, the roll out of technology is still in early stages, with the majority of municipalities and local authorities being a while away from semi or full mechanisation due to the high cost, limited production of local materials, administrative hurdles, lack of political will or protests from workers. The lack of equipment or specialist skills required to repair machines, also means there are frequent operation and maintenance failures. In Bangladesh, for example, truck drivers and helpers complain that it takes a long time to replace parts on the trucks (mostly imported from overseas) when they break down, as they are not locally available (something that NGOs and businesses are working hard to resolve). In India, a sewer-jetting machine (to unclog sewers) of 6000 ltr capacity can cost Rs. 44 lakh (approximately 59-60,000 USD), making such technology unaffordable for many local authorities. Linked to this, PPE or other handheld equipment may be poorly designed for the climate, task at hand, and comfort of the wearer (an issue also reported by female road sweepers who often receive PPE designed for men). This frequently leads to non-use or the rapid wear-out of PPE that is not replaced. Yet, the provision of PPE for pit emptiers in Khulna, Bangladesh and in Lahore, Pakistan, shows some signs of increasing attention now being paid to this issue.

Second, and a particularly recurrent theme from fieldwork in Bangladesh, is that the most marginalised workers involved in manual scavenging or emptying are often not able to access improved sanitation work or alternative livelihood options, due to entrenched stigma linked to identity, occupation and place of residence, as well as bribery, nepotism and corruption. Some manual emptiers also fear job loss associated with the switch to mechanisation. Likewise, in India, fears over job redundancy and takeover among Dalit workers are supported by evidence that indicates higher-caste or other socio-economic groups (predominantly men) are more likely to own or operate machinery and, even, to access rehabilitation support under the remit of ‘manual scavenger’. In both countries, improved or alternative livelihood options also require scrutiny, as many ‘liberated’ manual scavengers also remain in low-paid, informal or exploitative work arrangements, even if it is regarded as a step-up from handling human waste (for example, road sweeping or solid waste collection  –  which can, in fact, also expose workers to faeces). Whilst many may argue that job takeover by other (non-Dalit) groups can reduce stigma around sanitation work (an important avenue for future research and action), these challenges raise critical questions over who actually benefits from mechanisation, and who these technological innovations are designed for in the first place.

It is clear that societal attitudes, personal aspirations after hundreds of years of dehumanisation and viable alternatives for manual scavengers will not change, right away, in line with mechanisation. As we show above, mechanisation can also reinforce gendered, classed and casteist inequalities. This might be especially so when interventions oriented primarily towards profit, efficiency, proving one’s ‘business model’ or prototype, takes precedence over the realities of those cleaning our waste. With this in mind, we end here with some tentative avenues for further research, discussion and action among academics, activists, journalists, governments, NGOs, private businesses and workers themselves:

In the midst of this focus on mechanisation, sanitation workers will remain integral to the operation of this technology. Mechanisation in sanitation services should also include improving sanitation for workers themselves, to ensure their health and wellbeing. Yet, Dalits remain excluded from services, including toilets for their own homes, leading many to defecate in the open. The SBM’s construction of toilets without improvements in sewage systems (increasing the number of pit latrines and septic tanks requiring emptying) also means that manual scavengers will remain in India, denying other employment opportunities and worsening caste oppression. More research and activism is sorely needed to deepen our understanding of the impacts of mechanisation and ‘improved’ sanitation, and propose inclusive solutions and responsive alternatives, to make sure that not one more life is lost in manual scavenging.

The original article was published by FemLab.Co on 19 Mar 2021